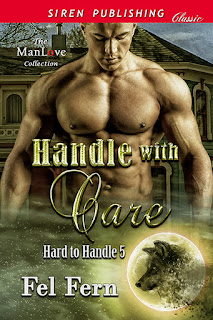 Cat shifter Aaron Conway has been one bad little kitty. He hooks up with hot guys at weddings, in the hopes of mending his own broken heart. Aaron knows it's a temporary fix but he doesn’t care. Aaron bites off more than he can chew when he hits on the wrong guy. Derek’s intense, dominant and intimidating but Aaron can’t seem to stay away. Derek’s a ticking time bomb but Aaron knows Derek’s more than a fling. He’s the one man Aaron’s been searching for his entire life.
Dominant werewolf Derek White’s fighting a losing battle. Sooner or later he’ll succumb to the violent impulses of the beast that shares his skin. He’s on his way to becoming a monster and Aaron’s a beautiful distraction. Derek’s instantly hooked from the moment they meet. Derek knows Aaron deserves better, but once he gets a single taste of Aaron, Derek knows there’s no going back. He’ll claim Aaron and make him his mate.