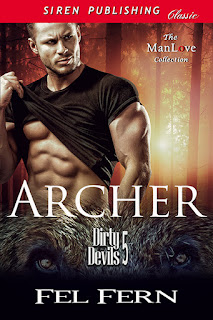 Ted Sutton’s life is a nightmare. Someone’s hunting him and the clock’s ticking. Ted has no one to turn to except Archer, a deadly grizzly shifter who saved his fur months ago. The more time he spends with Archer, the more Ted believes fate pushed him into Archer’s path for a reason. Archer claims they’re not a good match and Ted agrees. Too bad Archer already holds his body, heart and soul captive.

Archer Haynes’ days are numbered. He can’t bring the monstrous grizzly that shares his skin to heel and pretty soon, his Alpha needs to put him down. Archer’s unsalvageable. He no longer has anything to live for, until Ted re-enters his life. Ted’s a handsome little distraction but the submissive polar bear shifter has a dangerous psychopath on his trail. How can Archer save his fated mate, when he can’t even save Ted from himself?