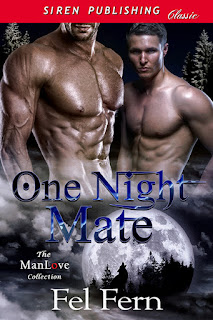 Lewis Matthews can’t remember a single thing. He wakes up in a cabin in the middle of nowhere with a huge bite mark on his neck. When a sexy growly stranger starts calling Lewis his mate, Lewis is confused. Lewis is a nobody but Nate’s making him feel things he’s never experienced before. Lewis is petrified. He’s never fallen head over heels for someone before but maybe it’s time he learned how to let loose and explore his hidden wild side.
Nate is one possessive werewolf. He’s always been an outcast, a misfit who never belonged anywhere else. When a brave little human comes onto him in a bar and begs Nate to bite him, Nate can’t refuse. Lewis is one tasty little morsel wrapped in a neat little package. Nate isn’t satisfied with a single taste. He wants more. Lewis doesn’t know it yet, but Nate intends to keep his one night mate. Forever.