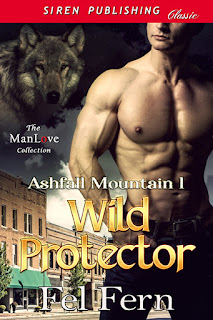 Teddy Grayson needs to get away from his old pack. A change of scenery is the answer but Ashfall Mountain is no vacation spot. It’s where violent shifters on the verge of turning feral end up. Teddy’s like a fish out of water in a pack full of werewolves who act more like beasts than humans but he’s also there for a reason. Teddy’s always burned a torch for his Dom, his brother’s best friend. He has no plans of leaving. He intends to stay until Dom admits they’re mates.
Dom Walker has his hands full. Day in and out, he’s doing his best to prevent his best friend from murdering his pack mates. Teddy’s a complication he can’t deal with but no one can ignore the mating call. Teddy doesn’t fit in with monsters like them but the submissive werewolf’s stubborn as hell. When Dom finally gives in, he realizes he’ll do anything to keep his mate.