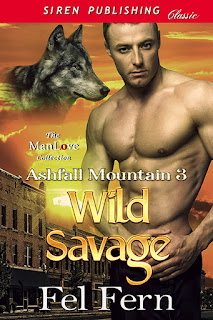 Chip Garner’s in a pinch. He’s sent to Ashfall Mountain to convince his old crush, Alec to return home and take over their pack. If Chip screws up, his father dies. Failure is not an option. The mission shouldn’t be too hard, but the boy Chip grew up with is gone, replaced by a menacing and possessive werewolf who is a danger to everyone. When the mating call beckons, Chip can’t resist. The white-hot chemistry between Alec and him creates sparks but it’s only a matter of time before Chip’s deception is unearthed.
Alec’s given up on hope a long time ago. When Chip resurfaces in his life, he knows he’s been given a second chance. Chip is his fated mate, but despite knowing Chip deserves better, Alec pursues the submissive wolf. It doesn’t matter to him if Chip comes with baggage. Can Alec deal with their old pack and claim his mate, while holding onto his sanity?