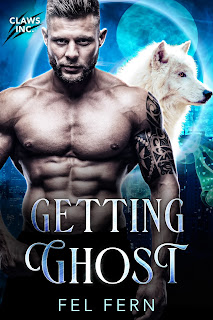 When werewolf Alpha Ghost finds an an abandoned baby on his doorstep, there’s only one Omega he can call for help. Tony’s selfless, sweet and caring…and far too tempting for his own good. Tony’s all he ever wants in a mate but Ghost knows Tony deserves the best. Not a freak of an Alpha like him. Maintaining boundaries is a lot harder than Ghost thinks, especially when he realizes he’s finally met his match.

Being trapped in a small cabin with a sexy younger Alpha and an adorable baby has its perks. Tony wants to be more than friends, but Ghost is as stubborn as they come. Ghost doesn’t believe he’s mate material but Tony is nothing but determined. Tony runs a successful business and he’s raised three sons on his own. He’s also more than happy to show Ghost that they’re prefect for each other.

The last unmated Olsen brother finally finds his fated mate in Getting Ghost. It is the fourth book in the Claws Inc. series. There are no cliff-hangers or cheating, and a HEA is guaranteed.