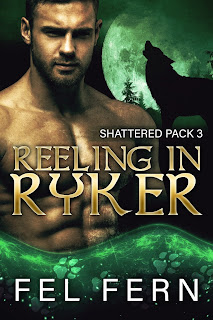 A desperate Omega who wants a kid. An Alpha who doesn’t know how to be a father. Can Heath and Ryker be a perfect match?

When the murdered body of his Omega ex-boyfriend is found and his son goes missing, Alpha Ryker Johnson enlists his pack mates for help. The search leads Ryker to a desolate cabin in the woods, to a dangerous pack of Alphas, and to Heath. Ryker can’t put his paw on it, but the frightened Omega brings out all his protective instincts to the surface. Is Heath a trap? Or could the Omega be something more? A treasure a bloodthirsty monster like Ryker never thought he’d find—his fated mate.Heath McDowell’s been a pushover his entire life. He didn’t fight his parents when they sold him to a vicious Alpha to fuel their drug habit. Then Ryker upsets the entire balance of his life. The Alpha claims the boy Heath saved is his missing son. Heath distrusts Alphas. They made his life hell but somehow, Ryker’s the exception. His attraction to the Alpha confuses Heath and excites him at the same time. It doesn’t matter if the chemistry between is explosive. Heath can’t fall for Ryker. The two of them are an ill-fated match.When a ghost from Heath’s past crawls out from the grave, Heath and Ryker have to work together to fight for their future.Reeling in Ryker is a full-length mm mpreg shifter romance which features an Alpha new to fatherhood and an Omega who’s struggling to get his life back together. There are no cliffhangers or cheating, and a HEA is guaranteed.