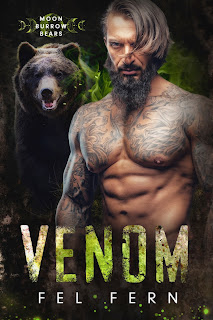 Rock bottom. Casper Holden finally knows what that feels like. He’s watched his father and brother die before his very eyes. The bloodthirsty new leader of his pride wants all the members of the Holden family dead, and that includes Casper. Hunted by the same people he once trusted, Casper has to fend for himself. But a lone omega without a protector can’t survive on his own. As Casper readies himself for death, fate assigns him an unexpected protector.

Vicious. Venom and his monstrous crew of grizzly alphas have been called worse names. A simple visit to a lion shifter pride turns complicated the moment Venom crosses paths with Casper. Casper is marked for death. His pride knows it, and so does Venom. That doesn’t stop Venom from committing the unthinkable. Venom doesn’t believe in mates. He’s incapable of love. Deep down, he knows he’s just a killer, but Casper believes he can be more.