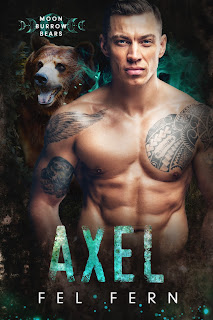 Julian is trapped in a nightmare of his own making. Can a protective biker bear give him a new lease on life?

Hope. Julian lost that last winter after the merciless decimation of his flock. No longer able to shift, Julian lives a bitter half-existence. Keeping his head above the water isn’t easy, especially when a scary but sweet biker bear disrupts his life. Trusting the wrong alpha once ruined Julian’s life. Julian can’t afford to make the same mistake, but he can’t stop thinking about Axel.

Persistence is key. Axel learned that the hard way when he’s assigned to bring Julian home. The tragedy that struck Julian’s flock left the omega with scars both inside and out. Axel’s good at breaking stuff and winning fights. Axel has no clue how to help his raven heal his wings but he’ll learn. When a dangerous killer from Julian’s past resurfaces, Axel steps in and takes charge. He’ll need to earn Julian’s trust fast…or lose his mate forever.