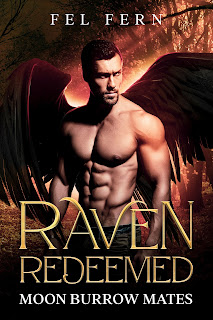 Half of Zackary Jones’ soul died the day rogue wolves ended the life of his mate and half of his flock. Being the lead alpha of the Moon Burrow Ravens is the only thing keeping Zack going. That, and an adorably ditzy vampire who runs Moon Burrow’s famous bakery. No strings attached. That had been Thad and Zack’s original arrangement. When the vampire wants more than what Zack can give, Zack retreats. It doesn’t take long for Zack to realise he’s made the worst decision of his life.

Thaddeus Blackthorn slammed the door to his bloodthirsty past when he moved to Moon Burrow. Here in this sleepy little town, no one knows who Thad truly is. Developing a crush on the town’s handsome new Raven King, had never been part of Thad’s plans. When Zack begins to reciprocate Thad’s feelings, it’s too late. A psychotic vampire from Thad’s past resurfaces. That monster won’t rest until he’s destroyed everything Thad holds dear in his heart—that includes Zack and his ravens.

Raven Redeemed is a m/m fated mates paranormal romance. Some events mentioned in Raven Redeemed occurred in Axel. It is recommended you read that book first.