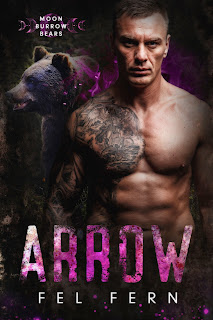 Two shifter groups fighting for dominance. One headstrong wolf and his protective biker bear caught in the crossfire.

Adam Moore has caught the unwanted attention of a monster. It’s the last thing Adam needs. His number one priority is keeping his father’s struggling bookstore afloat. When the situation worsens, Adam has no choice but to ask for a certain biker bear’s help. Arrow is his best friend—nothing more—but Adam is sick of lying to himself. He’s always been drawn to Arrow’s grizzly, but is it too late for the two of them?

Hot and cold. It’s always been that way between Arrow Weston and Adam. He’s been in love with his best friend for as long as he can remember. Arrow’s always been patient… until rogue wolves invade Adam’s town. Their leader wants to take Adam as his prize, but Arrow won’t allow that. Arrow will bring the war to his MC if that means protecting his stubborn omega mate.

War is coming to the Moon Burrow Bears…will the bears and their fated mates survive?

Buy now or read for Free on KU