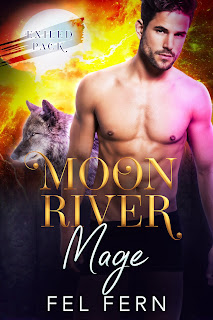 An ex-convict with a vendetta. A grumpy warlock with a shattered heart. Jason and Nolan are an ill-made match but fate disagrees.

Alpha wolf shifter Nolan is determined to get to the bottom of his brother’s death. His investigation leads him to an elusive coven of white magic users in Moon River. To a gorgeous warlock named Jason. Nolan and Jason don’t mesh. Nolan’s just been released from prison. Jason’s prim and proper as they come. Jason has no business with someone like Nolan, but Nolan finds himself drawn to the generous and selfless warlock.

Jason’s a warlock who’s sick of being second best at everything, including love. Fate must have an ill sense of humour when a badly injured werewolf Alpha appears at his doorstep. When Jason nearly kills himself to save his wolf, he realises he’s in for a world of trouble. Nolan’s spent the last five years in a steel cage. Freedom calls to him. Jason doesn’t want to force Nolan to put down roots. He also can’t bring himself to get too close, because Nolan might end up hurting him for real.

Moon River Mage is a M/M paranormal romance with an unapologetic and gruff Alpha werewolf and a heartbroken warlock who doesn’t believe in fated mates. It is set in the Exiled Pack series universe. There are no cliff-hangers or cheating, and a HEA is guaranteed.